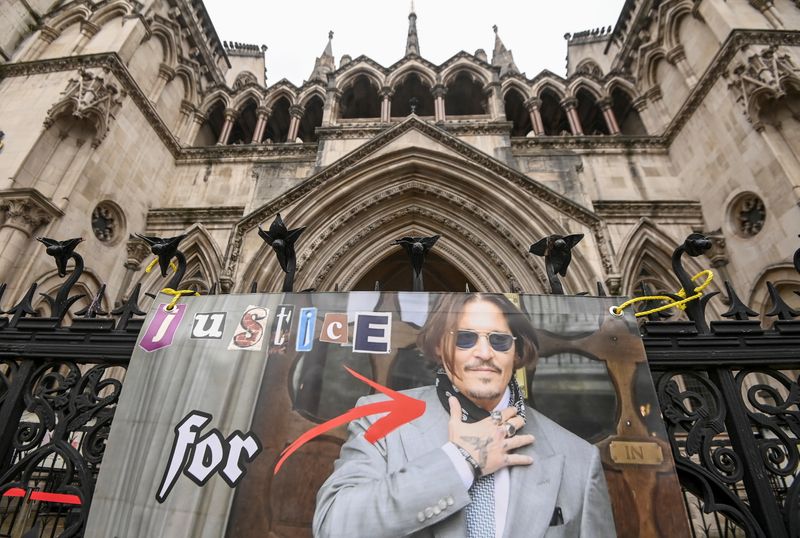 © Reuters. Poster placed by a supporter of actor Johnny Depp is seen at the High Court in London

LONDON (Reuters) – Lawyers for Hollywood actor Johnny Depp said his ex-wife’s claim she had donated her divorce settlement to charity was a “calculated lie”, as they sought permission to appeal a London High Court ruling which upheld that he was a wife beater.

Judge Andrew Nicol ruled last November that Depp had violently assaulted Amber Heard during their tempestuous five-year relationship, at times putting her in fear for her life.

He rejected Depp’s claims the allegations were a hoax and his portrayal of his ex-wife as a “gold-digger”.

That decision came after three weeks of hearings where the court heard claims and counter-claims from Depp, 57, and Heard, 34, who accused each other of violent outbursts.

Depp, star of films including “Pirates of the Caribbean” and “Edward Scissorhands”, had gone to the London court to sue The Sun newspaper and one of its journalists over an article that stated he had been violent towards Heard.

Following Nicol’s verdict, seen as highly damaging to Depp’s career, the actor was asked to leave the “Fantastic Beasts” franchise, the movie spin-offs from the “Harry Potter” books and films.

On Thursday, Depp’s legal team asked the Court of Appeal for permission to challenge Nicol’s findings, arguing the judge’s ruling was “plainly wrong”. They said they wanted a retrial.

Depp’s lawyers said they wanted to rely on new evidence that Heard had not given the $7 million from her 2016 divorce settlement to the American Civil Liberties Union (ACLU) and the Children’s Hospital of Los Angeles (CHLA) as she had said.

This was “a calculated and manipulative lie”, they argued in written submissions, designed to present her as “very virtuous and a victim”, and if known would have cast her evidence in a different light.

Depp’s lawyer Andrew Caldecott told the court that Nicol had “too glibly” accepted Heard’s version of events and had not conducted a judicial fact-finding exercise correctly. Asked if he thought Nicol had believed Heard’s every word, Caldecott said yes.

During the libel trial last summer, Heard said Depp would turn into a jealous alter ego, “the monster”, after bingeing on drugs and alcohol and had threatened to kill her.

Heard detailed 14 occasions of extreme violence when she said the actor choked, punched, slapped, head-butted, throttled and kicked her, with Nicol accepting 12 of these accounts were true.

Lawyers for News Group Newspapers (NGN), publishers of the Sun, argued the arguments for an appeal were “obviously wrong” and misconceived.

NGN’s lawyer, Sasha Wass, told the Court of Appeal the inference of Nicol’s ruling was that he had found Heard a compelling witness and that Depp lacked credibility.

“The learned judge did find on multiple occasions that Mr Depp had lied,” she said.

Another NGN lawyer, Adam Wolanski, said the “new” evidence about the divorce money to support the “gold-digger” theory – which he called a “misogynistic trope” – could have been obtained before the trial last year and Heard could have been asked about it then.

Wolanski said $950,000 to the ACLU and $850,000 to the CHLA had been by anonymous donors in her honour or designated as a donation from her, and she fully intended to fulfil her pledges.

“She said nothing dishonest in her witness statement whatsoever,” Wolanski said.

Court of Appeal Judges Nicholas Underhill and James Dingemans said they would give their decision “shortly” on whether to allow an appeal to take place.